ERIC Richardson’s role preparing the pitch at Butts Park Arena is a true labour of love.

And sometimes love is in short supply.

But don’t be fooled. He wouldn’t have it any other way.

“It’s certainly a challenge. There are frustrations. For me it’s about trying to make the pitches look good, not necessarily for the players, but the supporters, the people paying to be here,” he says.

His is arguably one of the hardest tasks in Coventry sporting life. The BPA pitch gets a lot of use, with Coventry United football games, Coventry Bears rugby league fixtures, and concerts, as well as Coventry Rugby matches and training sessions.

While that is brilliant news for Coventry Rugby, it comes at a cost, particularly to a man who wants the pitch to look its best for every occasion.

Responsibility for the rectangle of green is just one of the hats Eric wears at BPA, but his role is just as important and demanding of the same precision as a lineout, mismove in the centres or weighted kick for the wingers. His part in the match day experience cannot be underestimated.

Just think of the damage a bunch of grunt and groan forwards can do with their studs come scrum time, almost two tonne of muscle pushing forward, back and sideways.

Then there is the weather, which isn’t always kind.

“I’ve been here at 6am on a match day channelling water from the pitch. We had one of the worst winters last season and I was out there at times, in my wellies, minutes before kick-off. There were probably three games where the referee told me that if I could get certain areas of the pitch clear of water, the fixture would go ahead.

We didn’t want to cancel any game.

I had 30 kids from King Henry VIII School one Saturday morning, helping clear the ground. That was good, showing what a family-friendly, community club we still are.

But it’s been touch and go. I’ve only had four games cancelled and that was because the ground was frozen and there’s nothing you can do about that.”

Heavy rainfall can be a big problem, but a lack of rain is another challenge, given the absence of a water connection pitch-side for a sprinkler system to encourage the grass to grow.

And with just one hand lawnmower and a tractor at his disposal the odds are more often against him than with him.

But Eric is refreshingly stoic about the challenges and he and his six ‘invaluable’ volunteers, who divide into two working parties of three throughout the week, pull off their magic tricks to ensure the show goes on.

“We couldn’t do it without them. There are so many people volunteering their time to help this club. It’s special.”

There has been much talk about a 4G artificial pitch being laid at BPA to avoid many of the existing problems, but Eric insists it will mean more work, not less. Especially if usage goes up. 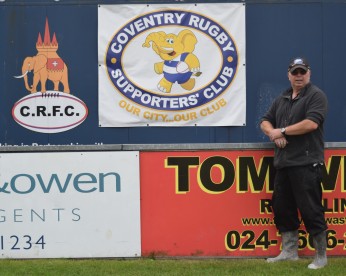 “If I put my groundsman’s hat on, and my supporter’s hat on, I would love to see them still play on grass. But with my commercial hat, it would be open for use 365 days a year. It’s something many, many clubs are going towards. We played at Cardiff a couple of seasons ago, their pitch is artificial and it’s really good.

It will be better for the club, but all those who think it will mean less work possibly don’t understand what’s involved. Look at the Ricoh pitch, that’s a hybrid and has been re-laid several times. They have irrigation, under soil heating and it’s not easy to look after. Saracens have just re-laid their pitch again. You don’t just lay it and leave it alone.

In fact, there’s far more work involved in looking after an artificial pitch.”

For the moment, Eric and his team of volunteers are desperately trying to breathe life back into the turf after the heatwave. “It’s looking quite dire. In this weather, the grass has died. I’ve put eight tonnes of sand on it, 15 bags of seed and fertiliser, although the pigeons have had more feed than the grass,” he laughs.

It’s been so hot that the outline of the old athletics track and jumps have become visible once more.

With the new 4G pitch in the offing, it would not be economical to relay the current turf, but it will stand up to the rigours of Championship rugby this coming season. Eric wouldn’t have it any other way.

“You do get great satisfaction at times. Rowland Winter [Coventry’s Director of Rugby] came up to me and thanked me for the work I put in. That was really nice. But on a really hard week in the middle of the season, when you’ve cut the grass, it’s all marked and looking nice, I will be up in the stand and think I’ve done a good job, that all the hard work has paid off.”

The very nature of rugby, whether league or union, means pitches can get ripped up and scarred, giving the added test of getting it ready within days, sometimes hours, for a football match.

Concerts throw in another curveball for Eric’s goal of pitch perfect.

“The guys came in to lay out the stage for the Steps concert and it took about three days. For the first time ever, the four rugby posts would not come out of the ground,” reveals Eric. “When you consider I’ve been taking them out for the football regularly, it should have been easy but they wouldn’t budge.

We literally had to cut the posts down to allow for the stage and I had to work out how to reinstate the posts. Then I had to walk around picking up all the metal bolts that had been missed after they’d gone.”

It’s not just the pitch. When we talk, Eric has been repainting the 4,000 steps in the main stand. He’s also Mr Maintenance for the offices and rooms at BPA.

Despite the trials and tribulations, Eric insists he loves the role.

Yet it’s far from the only job he does for his beloved Coventry Rugby. At home games he is chief steward, ensuring everyone’s safety as well as making sure everything is clean and tidy afterwards.

He’s also a head chef, preparing meals during the week for anywhere between two to 200 people.

And mostly – when he gets the chance – he’s a diehard supporter.

“It’s a bit like being Mr Benn, the old children’s TV character. I walk out of one door and come out from another with a different hat on,” he laughs. “It can be a logistical nightmare.”

A native of the North East, whose family uprooted to Coventry when he was 12, Eric was a regular at Coundon Road as a fan before finding himself ‘pottering around doing odd jobs’ in the late 1990s – a time of big upheaval in the club’s fortunes.

The club almost folded three years into the professional era, but Keith Fairbrother, the former prop who was among a glut of blue and white internationals in the late 1960s and early 1970s stepped in.

Just about the time Eric’s time in the catering industry was coming to a conclusion.

And it was Fairbrother who afforded Eric two memorable moments – one of which must have seemed like the impossible.

“I’m a qualified chef,” he says. “I went to Keresley Newland School and then to Henley College to learn the trade. I went out to Germany then came back to work in hotels. I was head chef at Jaguar and then Peugeot.

By 1986 I had become somewhat disillusioned and so became a sales manager for a bakery ingredients firm in Cheshire, doing 70,000 miles a year. I was able to still look after the rugby supporting side of me on a Saturday.

I first got involved in the club when Gerry Sugrue was in charge. Then Keith came in. I’d stopped enjoying the job and had sent in my resignation. That was enough for me to be summoned to a meeting in Runcorn the next morning. They didn’t want me to go, but driving back down the M6 it felt like a cloud had lifted.

Until I realised I had a family to support.”

His journey home took him, inevitably, to Coundon Road where he worked on an ad hoc basis helping keep the old field of dreams in order.

“Keith offered me a full-time job. I was already cutting the pitch at Coundon Road, although it was predominantly weeds. Especially by the old scoreboard. When it was cut it would look like grass. It worked.

Keith found out that I was a chef, so I’d be responsible for putting together a buffet for him on his Twickenham outings. I ended up being the maintenance guy, looking after everything.

One day he drove me down to The Butts and said this was where Coventry Rugby would be playing.”

What is now Butts Park Arena was back then a disused velodrome with athletics pitch inside the oval. Overgrown, unkempt, surrounded by trees – a sadly neglected bomb site of a facility that few would have been so foolhardy to tackle.

Let alone to have the vision of a future stadium.

“I saw the rubble,” recalls Eric. “I accepted it could be transformed. Coundon Road could not be developed. To go forward as a club we had to move from Coundon Road.

I was taking out lumps of concrete out of the velodrome with a pickaxe. We had trees, tree stumps, rubble and everything else.”

It is clear, despite the pragmatic argument in favour of the BPA, Eric has a fondness for Coundon Road. He was at the famous victory against an all-star Newcastle team in the 1990s, but a memory of miserable evening in 2001 still lingers above all others.

“There was this bloke, all on his own, in the middle of the pitch in the drizzling rain. It was Zinzan Brooke. I couldn’t believe it. I couldn’t believe how Keith had pulled that off. Here was one of the best forwards to have played international rugby and he was at Coventry, at Coundon Road.”

Whilst the former All Black was unable to help Coventry step back up into the top level of club rugby, he and Eric enjoyed many chats and Eric would sometimes drive him around.

“I’ve so many memories, so many good memories, but meeting Zinzan Brooke is right up there. Along with the Newcastle win. Then there was the move to the BPA. The first game we played on it and the pitch looked great.”

The last Coventry Rugby game at BPA, on April 28, was memorable for most supporters, with a record crowd for National League One being broken, Coventry signing off as champions with a win and then the presentations of the trophies. It was celebration time for players, coaches, backroom staff and supporters alike.

Except Eric had other worries. 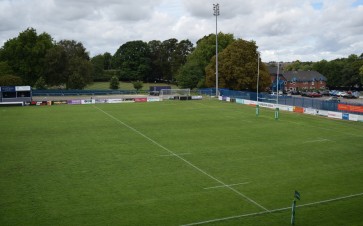 “On match day I run the car parking, get the players out, walk through the building checking out for the fire regulations, checking on the catering – it can be a logistical nightmare. That day [with 3,758 supporters coming through the turnstiles] while the game was going on I was working out how I could clean up the stadium from top to bottom ready for the rugby league match the following day. My brother, who everyone knows as Geordie, and I were out here at 7am in the morning working to clean it all up.”

A labour of love indeed.

One thought on “Inside Out – Eric Richardson”